A Just Analysis – of the Sunni Deobandi Dispute. Generally speaking, people think that the difference between Sunnis and Deobandis is limited to the permissibility and impermissibility of a few matters; this is false. However the reality of this issue is even acknowledged by the leaders of the Deobandi sect. It is thus written in the introduction to the book ‘Fayslah kun Munazarah’ by Molwi Manzur Sanbhali ;

A Just Analysis – of the Sunni Deobandi Dispute. Generally speaking, people think that the difference between Sunnis and Deobandis is limited to the permissibility and impermissibility of a few matters; this is false. However the reality of this issue is even acknowledged by the leaders of the Deobandi sect. It is thus written in the introduction to the book ‘Fayslah kun Munazarah’ by Molwi Manzur Sanbhali ;

“Perhaps many people, out of awareness, think that the difference between the Deobandis and Barelwis is actually the difference between different Muslim groups on customs such as Mawlid, Qiyam, ‘Urs, Qawwali, Fatihah on the 3rd, 10th, 20th, 40th days and annually, on their permissibility and impermissibiliy, and whether they are an innovation or not. However this understanding is incorrect.” [P. 5].

Then what is the real difference? Both of these factions accept that the issue is the statements found in (Deobandi books) Taqwiyat al-Iman, Sirat e Mustaqim, Fatawa Rashidiyyah, Tahdhir un-Nas, Barahin e Qati’ah, Hifdh ul-Iman, and the Fatwa ascribing lying to Allah Almighty. Of these, the last four are the most significant. The scholars of the Ahl al-Sunnah object upon these statements as they amount to a denial of necessary matters in religion, not to mention the unequivocally severe disparagement of Allah Almighty, & the Holy Prophet, may Allah bless him & grant him peace. In defence of their leaders, Deobandi individuals strove to their utmost capabilities but remained absolutely unsuccessful in their defence. Details of this are in several books whose titles are mentioned inside this work.

However in later times Molwi Sanbhali, placing all the interpretations and explanations of his predecessors before him, wrote ‘Fayslah kun Munazarah.’ The Deobandis claim that this a refutation of Husam al-Haramayn, whereas all these explanations and interpretations have been fully answered in detail in many books. Justice and fairness would require that along with narrating the words of their elders, that the response to these by the scholars of Ahl al-Sunnah should also have been answered. They assumed that not everyone is aware, hence only presenting their predecessors’ words in their own words, in such a manner as though only their research is valuable.

For this reason I deemed it necessary that the real nature of these books is presented before the lofty sentiments of Muslims, with a good intention, justice, fairness, seriousness and humility and to expose the reality of whatever Sanbhali and others stated in explaining and interpreting these statements and their mudslinging of Husam al-Haramayn.

Whatever self-applauding and self-adulation, e.g. boasting of victory etc, in debates was done by Sanbhali in the introduction of his book, I did not give any significance to this. This article of his is the fruit of his lifelong struggle and labour. It is apparent from this that in his defence of his elders, he must have been unable to utter anything surplus to this in any moment of his life. I have full certainty that whichever Allah-seeking fair minded person reads the valuable entire lifetime research of Sanbhali, and then our representations in this work, will decide on the reality of Sanbhali’s self-applauding self-adulation himself. —Mufti Muhammad Sharif al-Haq Amjadi, rahimahullah.

He was born in Ghosi, a town near Mubarakpur in Northern India. This was also the hometown of Sadrus Shari’ah; Shaykh Mufti Amjad Ali A’zami, rahmatullahi ta’ala ‘alayhi. His early education was in the esteemed madrassa at Ghosi. He was totally engrossed in studying and in worship and continued his Islamic studies at Jamiyat al-Ashrafiyyah, Mubarakpur. Mufti Sharif al-Haq also studied at Darul Uloom Mazhar al Islam, Bareilly sharif.

He was to later become the senior muddariseen & Ustad al-Ulema, at Jamiyat al Ashrafiyya. He was also responsible for establishing the Dar al-Ifta at Jamiya Ashrafiyya. Amongst his teachers :

Mufti Sharif al-Haq took bayah with Sadrus Shariah and also received khilafat from him. He wrote in excess of 70,000 fatawa and these were very much sought after throughout the subcontinent as well as from Muslims living in the west. Some of these were collected in several volumes. Brief collection of his works; 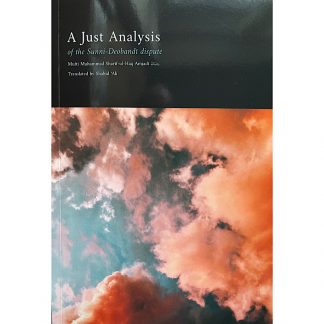 You're viewing: A Just Analysis £9.99
Add to basket
error: Content is protected !!