This is Volume One, which starts with Book 1; Beginning of Revelation to Book 8; Prayer. (Hadiths to 1 to 520). A new English translation and modern commentary of Sahih al-Bukhari, the first ever to be written in the United Kingdom for the twenty first century audience.

This is Volume One, which starts with Book 1; Beginning of Revelation to Book 8; Prayer. (Hadiths to 1 to 520). A new English translation and modern commentary of Sahih al-Bukhari, the first ever to be written in the United Kingdom for the twenty first century audience.

Almighty Allah has rendered the glorious life of the final Messenger, Prophet Muhammad, Allah bless him and grant him peace, an excellent example to follow and commanded, “And whatever the Messenger gives you, take it; and whatever he prohibits you, refrain from it.” (Qur’an 59:7).

According to Islamic law, hadith (prophetic tradition) refers to the report that describes the saying, action or tacit approval of the final Prophet, Allah bless him and grant him peace. In order to fully comprehend the message of the Qur’an and to understand Qur’anic injunctions, the knowledge of hadiths is essential, and indeed hadiths and wahy (divine revelation) both emanate from the same tongue; that of the final Prophet Muhammad, Allah bless him and grant him peace.

The Sahih al-Bukhari is a compilation of over seven thousand prophetic traditions recorded by the distinguished Imam Muhammad b. Isma‘il al-Bukhari (194-256 AH). The writings and authorships of Imam al-Bukhari number over twenty, however it is the Sahih al-Bukhari that has enjoyed more popularity than them all, generation after generation throughout the course of the centuries. It is known as ‘the most authentic book after the Qur’an’.

There are many valuable commentaries on the Sahih al-Bukhari available in the Arabic and Urdu languages, however as for those Muslims who are not fluent in Arabic or Urdu and those who wish to develop a contemporary and straight-forward understanding of the Prophetic traditions in the English language, for them a concise commentary to the sublime tradition is presented here.

Shaykh Muhammad Imdad Hussain Pirzada is an established scholar, teacher, orator, educator and author of numerous works. Due to his training in Islamic intellectual and spiritual traditions, his understanding of contemporary norms and his practical proﬁciency concerning the aﬀairs of the British Muslim community, he is distinctively qualiﬁed as a voice of reason and wisdom supplemented with simplicity in expression.

Shaykh Pirzada is gifted with the ability to adjust his academic and intellectual expression to the level of his audience. He conveys complex theological ideas and complicated issues in a comprehensive manner readily accessible to the common person but also beneﬁcial to the scholar alike. As such, he is a meaningful and accessible public intellectual. His written works are available for audiences of diﬀerent levels from pupils at schools to more advanced learners and researchers.

He has written dozens of books on educational, religious, and contemporary matters in Arabic, Urdu and English. The magnum opus of his works is the first modern exegesis of the Qur’an to be written in the UK, ‘Qur’an: The Sublime Word’, which comprises of 5 volumes. Currently he is working on a 10 volume commentary to the ‘Sahih’ of al-Imam al-Bukhari.

Shaykh Pirzada is founder and principal of Jamia Al-Karam in Retford, Nottinghamshire; founder and chairman of Muslim Charity; helping the needy; and president of the United Kingdom Branch of the World Organization for Al-Azhar Graduates. He is recognised as one of the 500 most inﬂuential Muslims in the world.

—1. Saying of the Prophet, ﷺ, “Islam is Based on Five,”
—2. Your Supplication is Your Faith,
—3. The Affairs of Faith,
—4. The Perfect Muslim is He from Whose Tongue & Hands Other Muslims are Safe,
—5. Which Form of Islam is the Most Superior ?
—6. Feeding Others is also a Part of Islam,
—7. It is Part of Faith for One to Desire for His Brother what He Desires for Himself,
—8. Love for the Messenger, ﷺ, is Part of Faith,
—9. The Sweetness of Faith,
—10. Love for the Ansar is a Sign of Faith,
—11. ”
—12. It is also a Part of Religion to Flee from Afflictions,
—13. Saying of the Prophet, ﷺ, “I have More Knowledge of Allah, subhanahu wa ta’ala, than Any of You.”
—14. For One to Despise Reverting to Disbelief as He would Despise being Thrown into Fire is also a Part of Faith,
—15. Mutual Disparity of the Believers is Based on Their Actions,
—16. Modesty is Part of Faith,
—17. “Then if they Repent, and Establish the Prayer, and Pay the Prescribed Alms, then clear out of their way”
—18. One Who Said: “Verily , Faith is Action”
—19. When One’s Islam is Not Genuine, and He is Obedient Only Outwardly or Out of Fear of Being Killed (then it is Disregarded),
—20. The Greet Openly is a Sign of Islam,
—21. Ingratitude to Husband, & One Form of Ingratitude being Inferior to the Other,
—22. Acts of Disobedience are a Sign of the Era of Ignorance (Jahiliyyah),
—23. “And if two parties of Believers fight with each other, then reconcile with them”
—24. Some Forms of Transgression are Lower in Status than Others,
—25. The Signs of a Hypocrite,
—26. Worshipping During the Night of al-Qadr is a Sign of Faith,
—27. Jihad is a Sign of Faith,
—28. Voluntary Worship during Ramadan is a Sign of Faith,
—29. Fasting in Ramadan in Anticipation of Reward is a Sign of Faith,
—30. Religion is Ease,
—31. Prayer is a Part of Faith,
—32. The Excellence of One’s Islam,
—33. The Aspect of Religion that Allah, subhanahu wa ta’ala, Loves the Most is One that is Most Constant,
—34. The Increasing and Decreasing of Faith,
—35. Zakah is an Integral Part of Islam,
—36. Accompanying Funerals is Part of Faith,
—37. A Believer Should Fear His Deeds going to Waste Without Him Being Aware,
—38. The Inquiring of Jibril from the Noble Prophet, ﷺ, about Iman, Islam, Ihsan,
—39. ”
—40. The Merits of the One Who Refrains (from What is Dutiful) to Preserve His Religion,
—41. Paying the Khumus is a Sign of Faith,
—42. Deeds are by Intention and Sincerity,
—43. Saying of the Prophet, ﷺ, “Religion is Good Will for Allah, His Messenger, ﷺ, the Leaders of the Muslims and the Common Muslims.”

—1. Merits of Knowledge,
—2. One Who is Asked on an Issue When He is Engaged in Conversation, He Ought to First Complete His Discourse Before Responding to the Questioner
—3. One Who Raises His Voice While Imparting Knowledge,
—4. The Saying of the Hadith Narrator; “Haddatha-na (he related to us)” “akhbara-na (he informed us)” or anba’a-na (he related to us)”
—5. The Imam asking His Companions Questions to Test Their Knowledge,
—6. On What Has Been Explained Regarding Knowledge,
—7. Reading to the Hadith Expert and Presenting to Him a Hadith,
—8. Explanation of Munawalah (Giving Manuscript to Student) and the People of Knowledge Sending Knowledge in Writing to Other Cities,
—9. Someone who Sits at the Edge of the Assembly, and Someone Who Finds a Place in the Gathering and Takes it,
—10. Saying of the Prophet, ﷺ, “Many (an absent) Person to Whom a Hadith is Conveyed May Retain it Better Than the One Who Heard (the Hadith) Directly,”
—11. Knowledge Comes Before Speaking and Action,
—12. The Prophet, ﷺ, Being Cautious of the Circumstances of the Companions, radi Allahu anhum, in Counselling & Giving Knowledge so That They Would Not Disincline to It,
—13. To Appoint Days for Those Seeking Knowledge,
—14. For Whomever Allah, subhanahu wa ta’ala, Desires Good, He Gives Him the Understanding of the Religion,
—15. Understanding in Knowledge,
—16. Being Desirous of Knowledge and Wisdom,
—17. The Mentioning of Musa, alayhi salam, Going to the Sea to Meet Khidr, alayhi salam,
—18. Saying of the Prophet, ﷺ, “O Allah! Grant Him the Knowledge of the Book”
—19. At Which Age is it Proper for a Child to Learn Hadiths?
—20. Going Out in Search of Knowledge,
—21. The Merits of Learning and Teaching,
—22. The Disappearance of Knowledge and Appearance of Ignorance,
—23. The Excellence of Knowledge,
—24. Issuing Decrees While Mounted on an Animal, etc,
—25. Responding by Indicating with the Hand or the Head,
—26. The Noble Prophet, ﷺ, Urged the Delegation of ‘Abd al-Qays to Maintain Their Belief and Knowledge and Inform those Whom they have Left Behind,
—27. Travelling to Seek a Solution to an Arising Problem & to Teach One’s Household,
—28. Taking Turns to Seek Knowledge,
—29. Expressing Anger in Caution and Advice When Seeing Something Disliked,
—30. He Who Sits on His Knees before the Imam or the Hadith Teacher,
—31. Someone Repeating His Saying Three Times so that it is (Well) Understood,
—32. A Man Teaching His Bondmaid and His Family,
—33. The Imam Advising and Teaching Women,
—34. The Enthusiasm for Hadith,
—35. How Knowledge will be Taken Away,
—36. Should a Day be Appointed for Women to Seek Knowledge?
—37. When Someone Hears Something (and He Does not Understand it) Should Ask it Again Until he Fully Understands It,
—38. The One Present to Convey Knowledge to the One Absent,
—39. The Sin of Falsely Attributing to the Holy Prophet, ﷺ,
—40. Writing Down Knowledge,
—41. Teaching and Counselling at Night,
—42. Talking About Knowledge at Night Prior to Sleeping,
—43. Preserving Knowledge,
—44. Listening Silently to Scholars,
—45. When a Scholar is Asked, “Who is the One with Most Knowledge?” It is Recommended for Him to Return the Knowledge to Allah (i.e. Say, Allah Knows Best”),
—46. Someone Standing Asked a Question from a Scholar who was Seated,
—47. Asking Questions and Issuing Fatwa when Stoning the Jamrahs,
—48. Allah, subhanahu wa ta’ala, Says “And You have been Given Very Little Knowledge”
—49. Whoever Abandons a Recommended Act for Fear that the People Will Not Understand it and They Might Commit Grievous Sins,
—50. Teaching Knowledge to Some and Not to Others Fearing They Might Not Understand,
—51. Shyness in Knowledge,
—52. One Who Was Shy and Told Another to Question,
—53. Mentioning Knowledge and Religious Decrees Inside the Mosque,
—54. One Who Answered the Questioner More Than What He Asked.

Other Books by this Author 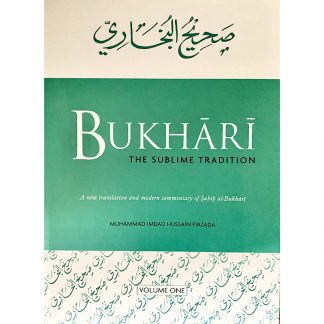