** A must for all sisters, this is an excellent book to increase your knowledge **

Sayyid Shah Ale Rasool Hasnain Mia Nazmi Barakäti was a well-known figure in the Sunni world due to his sacred Ahle-Baith lineage and his family affiliations to the noble Khangah (Zawiya) of Marehrah Shareef, India. He is a pure Zaidi Husaini Sayyid and the son of Sayyidul-Ulama, Hadrat Sayyid Shah Ale ‘Mustafa al-Husaini Barkäti , one of the most respected and influential personalities of the Muslim world. Sayyid Nazmi Mia was also the Saijadah of Qutbul Waqt, Sayyid Shah Abul-Husain Ahmad-e-Noori al-Husaini Marehrawi #. He is also the elder cousin brother to Prof. Dr. Sayyid Shah Muhammad Amen Mia al-Husaini Barkäti.

Sayyid Hasnain Mia Nazmi # was a senior officer in the Ministry of Information in India. He was also a former Senior Correspondent for All-India Radio. He was versatile in five languages, a profound author, a celebrated poet, a research scholar, an orator, advisor and also a Shaykh and Murshid of the Silsila-e-Qädiriyya Barkatiyya along with 12 other Spiritual Orders. He has numerous Mureeds in various parts of the world. Amongst his accomplishment in the field of English literature, he has already published an Encyclopedia of the Holy Qur’än and authored many books on various Islamic subjects, viz. The Great Beyond, The Way to Be, Destination Paradise, and Gateway to Heaven etc. He has also completed the difficult task of translating the Holy Quran in the Hindi language. May Almighty Allah grant him high stations in Jannah for all his services to Islam in the form of literature and research, Ameen.

Dear Readers! The Islamic scholars assert to have volumes and volumes of literature on various and almost all aspects of Islamic learning. But we find that our literature has very little for our women folk. They have been utterly neglected in the process of being educated about their rights and duties as defined by the Holy Quran and the traditions of the Holy Prophet.

There is a general fashion among the non-Muslims to criticize Islam particularly in respect of certain issues including divorce, polygamy, the status of woman with regard to the Pardah system, etc. etc. But most of these critics forget that Islam was the first religion to grant equal rights to woman. Islam prescribed strict norms for the honour and dignity of woman in the Islamic society.

This book deals with some of these norms and explains what are the rights and duties of a woman in the society. These few pages give you an idea of the freedom granted to women by Islam. This book includes topics like the four periods of a woman’s life, a woman’s duties in the capacities of a mother, a sister, a wife, a mother-in-law and a daughter-in-law.

I have tried to make this a complete textbook for women explaining the do’s and don’ts in faith as well as in day-to-day behaviour. To make this book more interesting and useful, I have taken pains to use a very simple language. The contents of this book are authentic as these have been derived from the books of Islamic Jurisprudence and supported by the traditions of the Holy Prophet #. This is an exclusive book for women but it will be equally useful for men, as they should also know what they owe to their better halves.

I think it is high time our women should be properly educated, as an educated woman in the family brings literacy to the entire generation. Muslim woman should, therefore, concentrate more on reading and writing. It is not necessary that she should get admission in a college or a university; she can learn at home by going through the books with the help of her school-going children. She should also read newspapers regularly to keep abreast with the news and views of the world. She can discuss politics with her husband, share his business activities, and become an enterprising woman entrepreneur herself.

The Muslim woman has full liberty to play her positive and constructive role in the society as a mother and a wife. The restrictions prescribed by Islam are for her own safety. Liberty is a good thing, but excessive liberty without any code of conduct has always resulted into chaos.

A woman may ask: What should be the code for determining my conduct? The Holy Qur’an provides the answer to that all-important question by imparting sure and complete guidance in all the different problems of human life, including the metaphysical and ethical problems with which philosophy deals, and comprehensive and genuine moral code. The Qur’än says: “And the middle path is rightly up to Allah de and some path is crooked. And had He willed, He would have guided you all together.” (16:9)

Almighty Allah de says: “And We have sent down this Quran on you in which every thing is clearly explained and as a guidance and mercy and good tidings for the Muslims. Undoubtedly, Allah & bids justice and good doing and giving to kindred and forbids indecency and wicked things and rebellion. He admonishes you that you may be mindful.” (16: 98-90)

Dear Sisters! Remember the warning of the Qur’än: “And be not like that woman who has broken her yarn into pieces, after it has become strong.” (16:92)

I hope my effort will be appreciated and my sisters in faith will surely remember me in their prayers for peace and prosperity, health and happiness and Allah’s #s Mercy and Favour.

I do not intend to restrict the readership of this book to women only; men also can benefit from this book. May Almighty Allah’s i blessings be always with us and our families. Aameen. 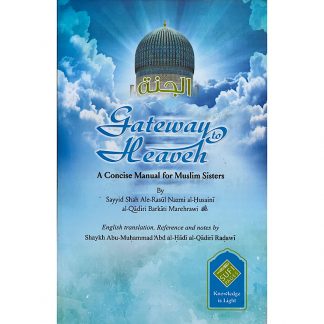 You're viewing: Gateway To Heaven – (English) £16.99
Add to basket
error: Content is protected !!