In Light of Sacred Traditions of the Beloved ﷺ

There are many books written on various topics and different subjects all relating to Islam, however there is scarcity of such literature, which correctly propagate the true teachings of Islam.

” The necessity for such a book was greatly felt by Faqih ul-Millah, Allama Mufti Jalal al-Din Ahmad al-Qadiri al-Amjadi, May Allah be pleased with him, and thus he compiled this book. The language used in ‘Anwar al Hadith’ is simple and easy to understand. Islamic rulings have been mentioned in quite an extraordinary style by laying the Ahadith in the sequence of Fiqh chapters. Ahadith have been collected from Sunan, Musannafat, Jawami’ and Athar and frequently we see the Ahadith being commented upon by the sayings of our pious scholars.

Such a great book is clear evidence of the author (Faqih-e-Millat) being a Master in the the fields of scared knowledge; more specifically Fiqh and Hadith. The English translation however much possible, has been kept close to the original words in urdu. In some places the urdu passages have been translated into English not word-for-word but the meaning of it, yet the originality still exists; as well as the translation. Footnotes have also been added to explain meanings in more detail, which has added to the benefit of this book.

There are many books written on various topics and different subjects all relating to Islam, however there is scarcity of such literature, which correctly propagate the true teachings of Islam. We are without doubt, in great need of such literature in the English language.”—Shaykh Manzar ul Islam al-Azhari, North Carolina, USA.

—Dedication,
—Acknowledgements,
—About the Author,

—Khutbah on Hadith Terminology,
—Sincere Intentions Introduction,
—The definition of Hadith and its Types,
—Fundamental Division of a Hadith,
—The Status of Hadith in Religion,
—One Fundamental Question,
—One Great Proof for the Authenticity of Hadith,
—The Beginning of this Remarkable Story,
—Opportunities for the Narrators to Transmit the Ahadith,
—Ascertaining the Report and its Isnad Criticism,
—A Heart Enlightening Incident,
—Another Incident,
—Ways of Strengthening the Chains of Transmission,
—The Principles of Isnad Criticism,
—History on the Compilation of Hadith.

The Book of Faith :
—Islam and Iman,
—Dwellers of Paradise and Hell,
—Transgressors and Heretics,
—Prophetic Traditions (Sunnats) and the Innovations (Bid’at),
—Knowledge and its Bearers,
—Pre-Destiny,
—Torment in the Grave,
—Signs of the Last Hour (Day of Judgement),
—Intercession and the Haud-e-Kawthar (Pond of Kawthar),
—Paradise,
—Hell-Fire.

The Book of Cleanliness:
—Ablution (Wudu),
—Things which break Ablution,
—Relieving Oneself (Istinja) in the Privy and its Etiquettes,
—Bathing (Ghusl).

The Book of Salaah:
—The Call to Prayer (Adhaan) and the Iqamah,
—Salaah,
—The Tarawih Prayers,
—Reciting behind the Imam,
—Reciting Ameen Silently,
—Raising the Hands in Salaah,
—Virtues, Benefits & Excellence of Sending Salutations (Durood) upon the Beloved Prophet, Salla Allahu ta’ala ‘alayhi wa Sallam,
—Jama’ah (Congregation) and its Excellence,
—The Excellence and Virtue of the Masajid and Places of Prayer and Worship,
—The Friday (Juma’ah) Salaah,
—From where should the Adhan for the Khutbah be Called?
—The Eidayn, –
—Method of Performing the Eid Salaah.

The Book of Funeral Rites:
—Suffering from Illness,
—Visiting the Sick,Cure and Remedies,
—Use of Spells and Amulets (Ta’weedh),
—Death,
—Bathing and Shrouding the Deceased,
—The Method for the Funeral Prayer,
—Funeral (Janazah),
—Burial of the Deceased,
—Crying and Lamenting over the Deceased,
—Martyrs and Martyrdom,
—Visiting Graves,
—Charity and Blessings for the Deceased (Isaal-e-Thawaab),
—How much fidya (ransom) should be given to the poor?

The Book of Zakah:
—Sadaqat-ul-Fitr,
—The Generous and the Miserly,
—Begging from People.

The Book of Fasting:
—The Blessed month of Ramadan,
—Sighting the Moon,
—Laylatul Qadr –
—The Night of Power,
—I’tikaaf (Spiritual Retreat),
—The Recitation of the Holy Qur’an and its Virtues.

The Book of Hajj:
—Hajj (The Greater Pilgrimage),
—Visiting the Blessed Mausoleum of the Messenger of Allah
—The Prophets are Alive.

The Book of Islamic Manners and Etiquettes:
—Good and Bad Names,
—Food and Etiquettes of Eating,
—The Etiquettes of Drinking,
—Clothes and Shoes,
—Wearing a Ring,
—Shaving and Trimming Hair,
—The Beard and Moustache,
—Dyeing Hair,
—Sleeping and Lying Down,
—Dreams,
—Fore-Telling,
—Sneezing and Yawning,
—Seeking Permission (to enter),
—Saluting (Greeting) another Muslim,
—Shaking with Both Hands.

The Book of Moral and Immoral Traits:
—Theft and Drinking Alcohol,
—Lying and Dishonesty,
—Backbiting and Mischief-making,
—Controlling the tongue and remaining silent,
—Anger and Pride, Oppression and Injustice,
—Greed of Wealth and Self Esteem,
—The World and Its Reality,
—Hypocrisy and Ostentation,
—Taking Pictures and Photos,
—Enjoining the Good and Forbidding Evil,
—Reliance (trust) upon Allah,
—Gentleness, Modesty and Good Character The Book of Virtues and Merits
—The Excellence and Superiority of the Beloved Prophet,
—The Holy Prophet is Unique and Matchless,
—The Night Journey (Miraj),
—Miracles of the Beloved Prophet,
—Miracles of the Noble Comnpanions,
—Knowledge of the Unseen. 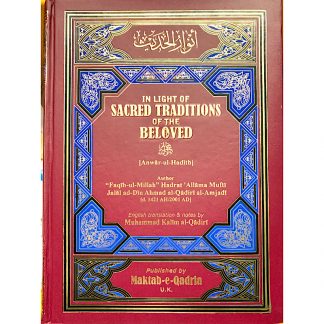 You're viewing: In Light of Sacred Traditions of the Beloved ﷺ £27.00
Add to basket