Dear Islamic Brothers & Sisters! Religious and welfare works often depend on donations. Although donations are collected one way or other, a number of people end up committing sins by making Shar’i mistakes due to the lack of religious knowledge when ‘spending’ donations.

Details:  Questions & Answers about Donations, New,
A Book Highlighting the Sins Committed
in Ignorance Regarding Donations,
*[A5] Paperback – 82 pages, Published 2014,
by Mawlana Ilyas Attar al-Qadiri,
Translated into English by Majlis-e-Tarajim,

Published by Maktabat ul Madinah.
Back in Stock August 2020

A Book Highlighting the Sins Committed in Ignorance Regarding Donations,

Extract from the Preface :

To learn Rulings regarding Halal and Haram is Fard:

The Holy Prophet Muhammad, may Allah bless him and grant him peace, has stated, ‘The one who learns one or two or three or four or five Kalimat [i.e. words] related to the Faraid of Allah, subhanahu wa ta’ala, and memorises them properly, and then teaches them to others, will enter Paradise.’ (Hilya-tul-Awliya, vol. 2, pp. 181).

A’la Hadrat Imam-e-Ahl-e-Sunnat Mawlana Shah Imam Amad Raza Khan, may Allah be pleased with him, has stated, ‘It is an absolute Fard for every individual to learn Shar’i rulings regarding his present state including the rulings of halal and haram as every human being is dependent upon them.’ (For detailed information, read pages 623 – 630 of Fatawa Razawiyyah, vol 23).

Dear Islamic Brothers & Sisters! Religious and welfare works often depend on donations. Although donations are collected one way or other, a number of people end up committing sins by making Shar’i mistakes due to the lack of religious knowledge when ‘spending’ donations. It is Fard for every donation-collecting individual to learn essential rulings about collecting donations. Therefore, with the sincere desire of accumulating the wealth of good deeds and protecting Muslims from sins, I have made a humble effort to provide information about donations in the form of questions & answers with the intention of gaining reward. —Shaykh Ilyas Attar al-Qadiri al-Ridawi.

—[1] : Questions and Answers about Donations,

—Excellence of reciting Salat-‘Alan-Nabi,
—Shar’i importance of donation,
—Ruling regarding those who ridicule donation-collecting individuals?
—Worst type of usury (interest) is disrespectful to Muslim’s,
—The honour of a Muslim is more significant than his wealth,
—The honour of the Mu`min (believer) is greater than the Ka’bah,
—Some habits of the Jews and Christians,
—The Prophet Muhammad, may Allah bless him & grant him peace, collected donations,
—950 Camels and 50 Horses,
—What if someone is prevented from collecting donations?
—Is every type of donation referred to as ‘Waqf money’?
—What if donations are from non-Muslims?
—Can we carry out ‘Niyaz’ with Masjid donations?
—Erecting Illuminations with Masjid donations,
—Leftover donations collected for events like the Ijtima’
—Leftover donations collected from several people,
—Leftover donation collected from 12 people,
—Ruling regarding Iftar meal in Mosque,
—Leftover Iftar meal of Mosque,
—Uses for Mosque donations,
—Personal use of donation,
—If the Masjid donations are given as loan,
—Is it permissible to borrow the entrusted donations?
—Method of paying compensation,
—What if the donation money is lost?
—Different cases of compensation in misusing the donations of Madrasah,
—Solution to the problem of spending Zakah on unlawful use
—If someone does not have the compensation money
—If a Sayyid owes compensation,
—Zakah or Fitrah spent on its unlawful use,
—Not everyone is aware of the rulings, any solution?
—How to educate donation-collecting people?
—How is it to deposit donations in a personal bank account?
—Definition of Mal-e-Ghaab [violently-seized possession],
—How is it to construct the washroom of the Masjid with usury [interest]?
—Performing Hajj with usury money,
——A frightful parable of the one who performed Hajj with stolen money,
——Ruin of the person who performs Hajj with haram money,
—If we do not take usury the banks might misuse the money ?
——1. ‘Like steam of blood,’ – Hadith,
——2. ‘Akin to adultery with mother,’ – Hadith,
——3. ‘Snakes within your stomach,’ – Hadith,
—Hospitality of guests of Madrasah,
—If an undeserving person ate Madrasah food,
—If someone unaware of ruling ate,
—It is Wajib not to give food to an undeserving person,
—What to do if a lot of food comes to Madrasah from outside?
—If Madrasah food is left over,
—How is it for participants of Madani Qafilah to cook food in kitchen of Madrasah?
—How is it for participants of Madani Qafilah to cook food in Fina-e-Masjid?
—Can participants of Madani Qafilah eat food of Jami’a-tul-Madinah?
—Can ‘others’ use blankets of the Madrasah?
—Taking cold water from the Masjid cooler to one’s home,
—Taking normal water from the Masjid,
—Ruling regarding the use of water when Madrasah is located in a large building,
—Permissibility of using items and materials of the Masjid within the Madrasah?
—‘Madani Pearls’ regarding keeping the Masjid and Madrasah things separate,
—Permissibility of writing names’ etc, on books of Madrasah?
—In the event a Madrasah desk is damaged?
—Writing on a Madrasah desk etc,
—How to make compensation?
—Ruling regarding complete authority over donations,
—Selecting careful words for issuing full authority,
—Proofs of Shar’i Hilah,
——When did the tradition of ear-piercing initiate?
——Cow’s meat as gift,
——Shar’i Hilah for Zakah,
—Definition of ‘Faqir’
—Definition of ‘Miskeen’
—An easy way of Hilah,
—Representative of Faqir,
—Can the representative of a Faqir use Zakah?
—Representative’s possession is possession of one being represented,
—To forbid Faqir from keeping money,
—Can Hilah be performed by cheque?
—How to perform Hilah of a very large amount of money?
—How is it to spend amount of Hilah on religious works?
—Making a gift with Hilah-performed money,
—Permissibility of giving a Sayyid Hilah-performed Zakah?
—Great reward for being kind to Sayyid,
—One who is kind to a Sayyid will see the Beloved Prophet, may Allah bless him and grant him peace, on Judgement Day,
—The wealthy and upper-classes’ can also help Sayyid’s,
—Careful words for returning Hilah-performed money,
—Careful words for the representative of Faqir of Zakah,
—The ruling regarding assisting non-Muslims’ ?
—What if one was to spend Zakah on a hospital run by a social institution?
—The way for a welfare institution to spend Zakah,
—Giving something from Waqf to non-Muslims is not permissible,
—The ruling regarding if one was to invest a donation into a business?
—Ruling regarding buying cows for collective sacrifice (qurbani) from donation money?
—Ruling regarding donating the ‘skins’ of sacrificed animals to schools?
—Let the poor and needy take the ‘skins’ of animals,
—Do not demand and be unreasonable regarding receiving ‘skins,’
—Do not plot to take the ‘skins’ of Sunni Madaris,
—To go and give a ‘skin’ to a Sunni Madrasah,
—What if one was to sell the ‘skin’ of one’s own ritual sacrifice?

—[2]. Questions and Answers about Madani Qafilahs,

—All participants should deposit equal amount of money for Qafilah,
—If amount of money is equal but the quantity of food is not equal,
—Madani Qafilah and the hospitality of guests,
—The remaining money of Qafilah,
—If money ‘donated’ by someone else for Qafilah is left over,
—Half-life, half-wisdom and half-knowledge,
—If the money donated for the poor is spent on the wealthy and rich,
—Can the donation received for Madani Qafilah be spent on other Madani activities?
—How is it permissible to take the rich to an Ijtima’ with donation money?
—Torment of misusing Waqf money, etc,
—The issue regarding money to travel with Madani Qafilah or attend Annual Ijtima’?
—6 Madani pearls for special train of Ijtima’
—Is it necessary to abide by worldly law?
—Ruling if the amount of travellers exceed the anticipated amount…,
—Do not let anyone travel without paying fare,
—Can social Institutions spend their donations on religious works?

Other books by this author 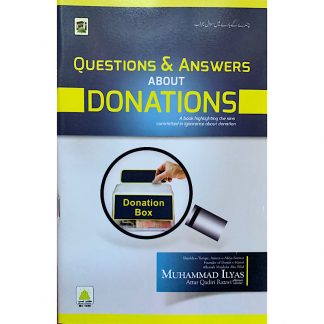