The Blossom of Youth

The Blossom of Youth – Allmighty Allah عَزَّ وَجَلَّ has blessed humankind with numerous powers band His & Wisdom has equipped man with the knowledge of using it.

Allmighty Allah عَزَّ وَجَلَّ has blessed humankind with numerous powers band His & Wisdom has equipped man with the knowledge of using it. Although the Creator has given such knowledge to animals, there is a unique difference between humans and animals. Since humankind is the highest order of creation, the Creator has therefore blessed it with a special faculty of knowledge that makes it superior to other creation. Allah عَزَّ وَجَلَّ has equipped the human beings to use this knowledge creatively and also enhance it tremendously. Such ability is not found in the animal kingdom.

Nowadays, claims are made that man is advancing very rapidly and will soon reach the peak of perfection. Man’s advancements in technology, science, chemistry, discoveries, etc. have created a new dimension in this world. His speed of advancement is reaching the once untouchable frontiers of the Universe. His scientific advancement in technology is accomplishing that work in minutes which the physical hand could not do a hundred of years ago. The feet required years of laborious effort to cover distances while modern technology covers that in hours. In this scientific era, a train, a car and an aeroplane can traverse the globe in a matter of hours while in the past this was not physically possible. What the physical ears and eyes could hear was limited but today’s modern technology can hear and see objects millions of miles away. Televisions, telephones, telescopes, and wireless communications can capture images and sounds in a split of a second from the far and wide corners of the globe while some years ago this was regarded as impossible.

People generally regarded this as an incredible achievement for mankind. But if one carefully ponders over these special abilities and knowledge on which the West relies for its survival, then certainly, one will reach the conclusion that day by day man is not progressing, but in fact regressing. It is possible that one may refute this assumption by presenting proof of man’s progress to the contribution of humanity. However, man’s special skills have also led to his destruction e.g. numerous types of drugs are researched and manufactured to protect and enhance these special skills of man. But these proofs are actually delusions which can be understood with a little thought.

The increase in numbers of an entity does not prove the increase of advancement or progress of that entity. A correct conclusion can be achieved after pondering carefully at all factors. For example, 200 years ago in a community of 100 thousand people, within 10 years it was found that there was an increase of 10 thousand perfectly healthy and strong people amongst them. On the contrary, nowadays there is not such a high rate of increase of healthy people in communities. In fact in a community of 100 thousand people, one will find the rate of a maximum of 20 or 25 thousand and that too, most of them are weak, sick and disabled. Now, would you sincerely classify this as an increase or decrease? Excessive sickness, weak physique and decrease in productivity abnormal to natural growth rate clearly proves that the productive sperm or special powers of the humankind were not only hindered in progress but also not protected as it should have been, otherwise such a situation would not have prevailed. 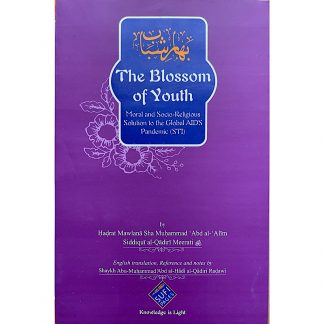 You're viewing: The Blossom of Youth £13.75
Add to basket
error: Content is protected !!