The Life Of The Prophet Muhammad ﷺ – Vol 3

The Life Of The Prophet Mohammad ﷺ – Vol 3 has been compiled in the fourteenth century AD by a prominent Syrian scholar, Al-Sira al-Nahawiyya by In Kathir is a full examination, in chronological order, of the background, life and mission of the Prophet Muhammad, peace be upon him. Drawn from the earliest and most reliable Arabic sources, it offers, in this English translation, the fullest available account of the historical circumstances and personalities most important in the founding of Islam. Ibn Kathir’s work offers a fine example of Islamic scholarship; the quotations and anecdotes that constitute its core are evaluated in terms of the trustworthiness of their sources. Variant wordings that are related through differing lines of transmission are noted, and Ibn Kathir gives both his own assessments and those of the earliest Islamic authorities concerning the likely authenticity of these records. The comments and conversations, derived from ancient texts, that are quoted in this work constitute the basis of our knowledge of Islam during the lifetime of its founder,

Volume Ill gives details of the numerous battles and campaigns waged between 3 AH and 8 AH to defend and spread the religion of Islam.

Ibn Kathīr was born in approximately 1313 in the Boesra district of eastern Damascus, and studied with the many great scholars working in the city during his time. He died in 1374.

Trevor Le Gassick is Professor of Arabic Literature at the University of Michigan. He has devoted himself to the translation and commentary of important works, both contemporary and from earlier eras, that reveal important aspects of the rich texture of Arabic literary culture. 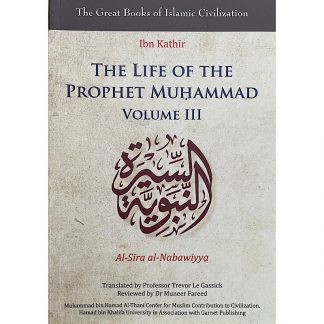 You're viewing: The Life Of The Prophet Muhammad ﷺ – Vol 3 £29.95
Add to basket
error: Content is protected !!