The Preamble to Faith

Alahazrat, Rahmatullahi alayhi, wrote the book Tamhid e Īmān ba Āyāt e Qur’ān or The Preamble to Faith in the Light of the Qur’ān, to explain the basis of faith and priorities we should have as Muslims and to refute the propaganda that he was careless in takfīr.

All praise be to Allāh Almighty, the Lord of all the worlds. Blessings and peace upon our master Muĥammad, Salla Allahu ta’ala ‘alayhi wa Sallam, the prince of all the worlds; and the leader of all Prophets and Messengers; he who was sent with guidance and as a guide to the world. O Allāh! We ask Thee to guide us towards truth and upon the right path.

The majority of Muslims in India belonged to traditional Sunni faith until dissenting groups began to appear in the early 19th century [the 12th century after Hijrah]. Ironically, the grandsire of most splinter groups thereafter, Ismāýīl Dihlawī, was the grandson of a prominent Sunni scholar – Shāh Aĥmed Dihlawī, famously known as Shāh Waliyullāh al-Dihlawī.

Shāh Ismāýīl’s books like Taqwiyatu’l Īmān, Şirāt e Mustaqīm and pamphlets like Ek Rozi introduced ideas imported from ancient and modern heresies unknown to commonfolk and thus ignited the fire of sectarianism in the subcontinent. Scholars, including his own cousins, Shāh Makhşūsullāh Dihlawī and Shāh Mūsā Dihlawī refuted him. Indeed, many of those who staunchly opposed him, like Fađl al-Ĥaqq Khayrābādi, were students of his illustrious uncle Shāh Ábd al-Ázīz al-Dihlawī.

After Ismāýīl died in 1831, it seemed as if the tribulation had subsided; but unfortunately, it was rekindled and defended by his followers and admirers from the founders of the Deoband school. Úlamā expressed their displeasure, but Deobandi elders were committed to defend Ismāýīl. The disease of irreverence spread and amplified; major scholars of the Deoband school wrote things and preached doctrines that no Muslim would utter, or even wish to hear. Sunni scholars reproached them and refuted this new sect – but they ignored all remonstrations and pleas to revert.

Eventually, Alahazrat Imām Aĥmed Riđā Khān also issued the ruling of kufr upon four senior scholars of Deoband and asked them to repent from these blasphemous statements. Deobandi scholars pretend as if this activity was on account of Alahazrat’s misunderstanding or rancour or because of some trivial reason that had made him oppose them. On his visit to the blessed sanctuaries in 1905, he presented this ruling to scholars in Makkah and Madinah for endorsement. Major scholars attested to the ruling of kufr as mentioned by Alahazrat and praised him for the clarity of his fatwā and commended his action. These attestations were published along with the fatwā in the form of Ĥusām al-Ĥaramayn.

After Alahazrat’s return from Haramayn and the publication of Ĥusām alĤaramayn, Deobandis responded in many ways: character assassination of Alahazrat, accusations of lies and slander, while some others tried to dismiss the issue by trying to explain explicit insults in favourable light.

One common response was: ‘Deobandis are also scholars and pious men; and we should not criticise them’. Deobandis allege that Alahazrat deceived the scholars of Haramayn by mistranslating and misrepresenting the passages in question. One of those accused, Khalīl Aĥmed Ambhetwī Sahāranpūrī, wrote a book Al-Muhannad in which he denies (both on his own behalf and those scholars of his group) that they held such beliefs and even claimed that they never said or wrote any such thing. Mawlānā Sayyid Naýīmuddīn Murādābādī, teacher of many prominent authors and translators in the subcontinent, wrote Daf’ al-Talbīsāt refuting the delusions and exposing the lies of Al-Muhannad.

Another serious charge made by Deobandis in a bid to deflect criticism of their own scholars, is that Alahazrat rushed to label someone or anyone kāfir, if they differed from his viewpoint, and that he did not hesitate or deliberate in this matter. According to them, the takfīr of Deobandi elders was also a product of haste and lack of deliberation.

Alahazrat, Rahmatullahi alayhi, wrote the book Tamhid e Īmān ba Āyāt e Qur’ān or The Preamble to Faith in the Light of the Qur’ān, to explain the basis of faith and priorities we should have as Muslims and to refute the propaganda that he was careless in takfīr. He explains fundamental principles of faith, analyses disparaging statements made by Deobandis and the implication of such statements. He describes the background and conditions which led to the ruling and mentions the extreme carefulness and restraint that he exercised in takfīr, countering accusations that he was ‘quick to label anyone kāfir’. A similar argument was made by an American scholar, Nuh Keller.

—[2] Lesser than the Devil’s Knowledge, 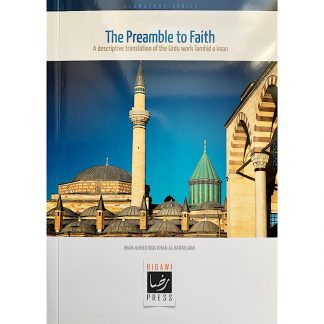 You're viewing: The Preamble to Faith £7.95
Add to basket
error: Content is protected !!