The True Concept of Iman

There were always two groups amonst the Muslims. This is a historic fact. One group was known as the Mukhlisin [the sincere Believers] and the other was known as the Munafiqin [the hypocrites]. The former was regarded as the true religious Believers, and the latter were regarded as mere namesake Believers. There are numerous distinctions between these two groups. One of the important and distinguishing factors of the sincere Muslims was their faithfulness in every action and in their words which emanated from the depths of their hearts. Every word uttered from their lips was calculated and never contributed to deception or falsehood. It was for this clarity and truth that Islam honoured their every word.

On the contrary, the Hypocrites spoke sweet words but had a deceptive and hidden agenda. Therefore, the Holy Qur’än refuted their words in very strong terms though, externally they seemed very sincere. The Holy Qur’ an says that on one occasion the Hypocrites came to the Beloved Habib صَلَّى ٱللَّٰهُ عَلَيْهِ وَسَلَّمَ and declared:  “We testify that you are indeed the Messenger of Allah عَزَّ وَجَلَّ “

In another place the Holy Qur’an says: “And when they receive any good, the hypocrites say that this good is from Allah عَزَّ وَجَلَّ.”

Such is the condition of today’s munafiqin. They place great importance on Tawhid, Ibadah, shirk and bid’ah. But their real intention is to keep the hearts of the Muslim masses away from the Beloved Rasul of Allah عَزَّ وَجَلَّ. They harp on the Tawhid of Allah Is and insult the integrity of the beloved servants of Allah عَزَّ وَجَلَّ. They misinterpret the technical terms of Elah, Rasül, Nabi, and Iman.

Their incorrect presentation of these terms confuses the masses, and because of their outward garb of piety and devotion they easily convince and influence the layman. The softness and sweetness of their words melt the unwary public who look at them as “angels” that descended on earth as beacons of guidance. But when the Holy Qur’an examines this outward piety and sweetness, it turns out to be nothing but hypocrisy and deception.

We have seen many Muslims of good, sound Islamic backgrounds and possessing pristine beliefs become victims of this calculated hypocrisy. This has further led to disunity in the once united brotherhood of the Muslim Ummah. It is amazing that the promoters of this hypocrisy quote Ayahs of the Holy Qur ‘an and Ahadith to substantiate and acknowledge their kufr to try and convince the unwary Muslims.

I felt the hammer of Truth bash my consciousness to do something about this onslaught against Islam and the Beloved Servants of Allah عَزَّ وَجَلَّ. Haqq penetrated my heart and forced me to take swift action and save the unwary souls from being enslaved by Hypocrisy and kufr. Hence, I invoked the Glorious and Compassionate Lord of Mercy عَزَّ وَجَلَّ through the Wasilah of His Beloved Habib صَلَّى ٱللَّٰهُ عَلَيْهِ وَسَلَّمَ to grant me courage and Toufiq to guide this beloved Ummah on the pristine beliefs of the Ahle-Sunnah wa Jama’h.

For this reason, I very humbly present this manual of Haqq to this beloved Ummah for their benefit and reading pleasure. Hakim al-Ummah Hadrat ‘Allama Mufti Ahmad Yär Khan Na’imi could not have written this book in a better and more clearer way. He has exposed the Truth as recorded in the Holy Qur’an and Hadith al-Sharif. May the Merciful Allah عَزَّ وَجَلَّ sanctify his soul. In this book are unbiased and correct explanations of the four fundamental Islamic technical terms of ELAH, RASUL, NABI and IMAN

I pray that Almighty Allah عَزَّ وَجَلَّ protect the Iman of every Muslim and bless their hearts and souls with love, honour, and Adab for His Beloved Habib, Sayyiduna wa Mawlana Muhammad Rasululläh صَلَّى ٱللَّٰهُ عَلَيْهِ وَسَلَّمَ and the Awliya and Swalihin. AMIN. 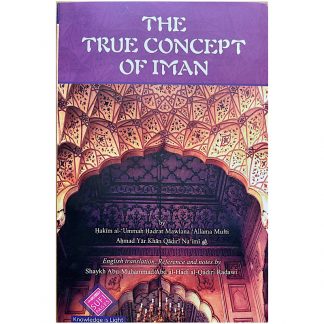 You're viewing: The True Concept of Iman £11.99
Add to basket
error: Content is protected !!