A Biography of Riđā Khān al-Ĥanafī al-Qādirī al-Baraylawī, may Allah be pleased with him, famously known as Alahazrat in the subcontinent was born in 1272 (1856) in Bareilly, a prominent city in Uttar Pradesh, North India. His grandfather named him Al-Mukhtār.

Details: Who is Alahazrat ? New,
‘An Introduction to the Life & Work
of Imam Ahmad Rida Khan al-Baraylawi,’
*[A5 ] Glossy Paperback – 112 pages,
by Shaykh Abu Hasan,
Printed in Turkey,
Published by Ridawi Press.
Part of the ‘Biographies’ Series.

Highly Recommended!
Its is unlikely that this biography of AlaHadrat will be surpassed !

From the Rear Cover :

“Praised be Allah ta’ala for the immense favour of giving us this man of knowledge, a practising scholar, meritorious, righteous, praiseworthy, virtuous, a living example of the maxim : “How much our elders ceded for their successors [to complete],” peerless in his time, unique in his era, Mawlana Shaykh Ahmad Rida – may Allah ta’ala vouchsafe him and keep him to crush the impuissant arguments of heretics by the force of Qur’an and Hadith.

And why not! The scholars of Makkah bear testimony [to his greatness] and if he were not so distinguished, they would not have accorded him such respect. Rather, I say, if we hail him as the Reviver of this century, it would be just and truth : Nay it is not difficult for Allah ta’ala / to gather a world within an individual. May Allah ta’ala reward him, and give him an immense reward on behalf of this religion and its adherents: and may Allah ta’ala bestow upon him bounties and His pleasure by His Grace and Mercy.”
—Shaykh Sayyid Ismayil Khalil,
Custodian of the Library of the Grand Mosque, Makkah, 1323AH.

“The Reviver of Islām, grandmaster of tafsīr, ĥadīth and fiqh, peerless Ĥanafī jurist of his time, vanquisher of innovators and enemies of religion, foremost defender of faith and the imām of Sunnis, polymath, poet, teacher, mufti, gnostic, guide Mawlānā Aĥmad
Riđā Khān al-Ĥanafī al-Qādirī al-Baraylawī, may Allah be pleased with him, famously known as Alahazrat in the subcontinent was born in 1272 (1856) in Bareilly, a prominent city in Uttar Pradesh, North India. His grandfather named him Al-Mukhtār.

Alahazrat’s Humility : His love and hate was only for the sake of Allāh. He neither hankered after praise, nor was he hurt by criticism. He was exactly as he has described himself in a quatrain :

I flatter none, nor others deride –
No praise I heed; no curse, no chide.
The lonely nook has where I dwell,
Few books, an inkpot; and a quill.

Alahazrat was very cautious in his poetry which consisted mostly of eulogies of the Prophet, ﷺ, and in his own words: “It is the toughest form of poetry, even though people think it is the easiest. It is like walking on the edge of a sword. This is because, if a person exaggerates, he will have elevated him, ﷺ, to godhood; and if he is reticent, he may diminish his lofty stature.” His poetry does not use any word that does not befit the
stature of RasūlAllāh, ﷺ, nor does he use expressions that may appear to contradict the creed of Ahl as-Sunnah.”

Shaykh Abu Hasan is a student of Islamic sciences and Sacred Law. Ĥanafī–Māturīdī and aspirant to the Qādirī path, he is an ardent admirer and follower of Imām Aĥmad Riđā Khān al-Baraylawī, may Alah be pleased with him. He translates bits and pieces from classical texts in the course of his learning for his own edification which he shares as helpful notes to beginners like himself. Some of the articles written by him can be found on tanwir.org and ridawi.org; he also writes on sunniport.com, an Islamic forum.

Other books by Ridawi Press 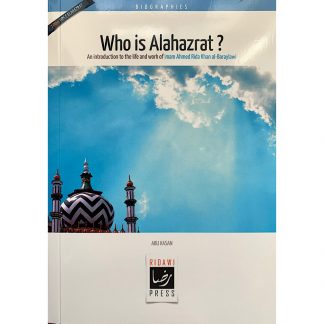