This is the new imroved version of one of the best selling books by Al Karam. A simple but comprehensive book covering every aspect of fundamental Islamic belief (aqida). Widely used across madrassahs and Islamic schools in the west. Includes exercises at the end of each chapter to aid students revision.

This is the new imroved version of one of the best selling books by Al Karam. A simple but comprehensive book covering every aspect of fundamental Islamic belief (aqida). Widely used across madrassahs and Islamic schools in the west. Includes exercises at the end of each chapter to aid students revision.

Review : The book, “Islamic Beliefs” —Over a dozen of the books compiled by the respected ‘Allama, on a variety of important topics (such as Arabic Grammar, Fiqh, Hadith and Seerah) are receiving appreciation and acclamation. Praise be to Allah, the respected ‘Allama has presented to the academic world the present counselling and thought provoking work. May Allah accept this endeavour of the ‘Allama.

This book is a collection of the important and fundamental beliefs of Islam. It is a unique gift for the sound natured man. A glance over its contents reveals that along with being beautifully composed, it is full of many thought provoking subjects and intellectual and narrative proofs. Due to its logical and intellectual proofs, this book will on one hand play a very effective role in erasing the doubts in the minds of wavering Muslims and will make them into right believing Sunnis. Whilst on the other hand, it will be very efficient to remove the ‘scientifically’ based arguments of the non-Muslims.

May Allah bless the author and reward him for compiling such a valuable and informative book and make this book useful for all Muslims, especially the Muslim students. —Sahibzada Muhammad Habib al-Rahman Mahboobi, Suffa Tul Islam Assoc’n, Bradford, UK.

—The reason for writing.

Chapter [2] Imaan (Faith),
—The difference between Islam and Iman,
—The Unbeliever, apostate and hypocrite.

Chapter [3] Belief in Allah,
—Shirk, (polytheism),
—The Qur’an and Tawhid,
—The Bible and Tawhid.

Chapter [4] Tawhid and Logical Proofs,
—Who was before Allah ?
—Allah is everywhere ?
—A debate upon the existence of God,
—Allah exists,
—Allah Is only One,
—A disbeliever,
—God cannot be seen,
—A conversation between a Muslim and a disbeliever,
—Imam Jafar al-Saadiq,
—God does not sleep,
—Imam al-Shafi’i,
—God is Needed,
—Creator of All,
—Self existent,
—The True Creator,
—One God.

Chapter [5] Tawhid and Science,
—Some verses of the Qur’an relating to Creation.

Chapter [6] Belief in the Prophets of Allah,
—The difference between a Rasool (Messenger) and a Nabi (Prophet),
—The number of Prophets,
—Definition of Prophet,
—The need for Prophets,
—Guidance,
—Practical Example,
—Human Understanding,
—The Human Mind,
—Holy attributes,
—Important point relating to Prophet’s,
—Eminent status,
—Innocence,
—Obligatory respect,
—The Status of Prophethood,
—Duty of Preaching,
—Superior Intellect,
—Knowledge of the Unseen (Ilm-e-Ghayb),
—Human Nature,
—Revelation,
—Life of a Prophet,
—Bestowment of Allah, subhanahu wa ta’ala,
—Matters which could not have been fulfilled without Prophethood,
—Tawhid (Oneness of God),
—Irfan (Recognition of God),
—Worship,
—Lawful and Unlawful,
—Practice,
—Human Nature,
—Good and Bad,
—Mu’jizaat (miracles),
—The difference between mu’jizah and karaamah.

Chapter [7] Proofs of the Prophethood of Muhammad, Salla Allahu ‘alayhi wa Sallam,
—The Mission of Prophethood,
—The Luminous visage,
—The Fulfillment of Prophecies,
—Miracles,
—The Book of Allah, subhanahu wa ta’ala,
—Invitation of Mubaahala,
—Confirmation of previous Prophets,
—The particularities of Muhammad, Salla Allahu ‘alayhi wa Sallam,
—The Need for the Seal of the Prophets,
—Completion of the Deen,
—Completion of Irfan (recognition),
—The Preservation of the Qur’an,
—Universal Prophethood,
—Last Model,
—Khatm al-Nabuwwah (finality of Prophethood) is a blessing,
—The pure Ahl al-Bayt and the Aal, (The Prophet’s Blessed Household)
—Umar ibn Abdul Aziz,
—Imam Malik,
—Sahaaba al-Kiraam (The Noble Companions),
—Some Sayings of the Prophet, Salla Allahu alayhi wa Sallam, regarding the Sahaaba,
—Pir Muhammad Karam Shah,
—Wali-Allah (Friend of Allah),
—Aalim al-Deen, (Religious Scholar),
—The link between Wali-Allah and Aalim al-Deen,
—Man.

Chapter [8] Belief in the Angels,
—The Jinn,
—The Devil (Shaytan – Iblees),
—The record of Good and Evil.

Chapter [12] Resurrection (al-Qiyaamah),
—Consequences of Rejecting al-Qiyaamah,
—The Need for Qiyaamah,
—Hidden Crimes,
—Truth and Falsehood,
—The Reward of the Martyrs,
—Zia al-Ummah Pir Karam Shah,
—The Qur’an and Qiyaamah.

Chapter [14] The Day of Qiyaamah,
—Meezan,
—Register of Actions,
—The Fountain of Kawthar,
—The Bridge of Sirat,
—Shafa’ah (Intercession),
—Paradise,
—Hell,
—Death.

Other Books by this Author 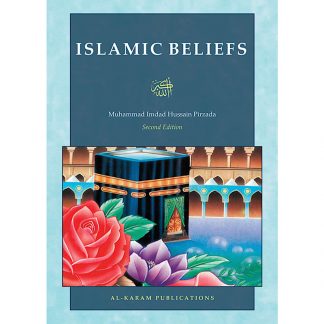