Dear Islamic Brothers & Sisters ! Did you know that even a person who went on the holy pilgrimage of Hajj was buried in a grave full of black snakes due to hatred that he kept in his heart towards others. This parable is an eye opener for all of us.

Dear Islamic Brothers & Sisters ! Did you know that even a person who went on the holy pilgrimage of Hajj was buried in a grave full of black snakes due to hatred that he kept in his heart towards others. This parable is an eye opener for all of us, especially for those whose outward appearance looks very pure and sweet but inwardly they are fully contaminated with malice, hatred and other impurities. Just think about it! What would happen to us if we had to encounter such poisonous snakes and scorpions in our grave?

So, before we breathe our last when the respite of repentance is not allowed, let us seek forgiveness of our sins, submitting ourselves in the court of Almighty Allah and let us pray to our All-Powerful Creator.

—The Noble Prophet, ﷺ, recited Ṣalāt-o-Salām upon himself,
—The grave was infested with black snakes,
—Treatment of concealed sins is absolutely necessary,
—What does malice stand for?
—Bearing malice towards a Muslim and the ruling of Sharī’aĥ,
—Devastating effects of malice,
—Malady of the previous Ummaĥ.

—Live as brothers among each other,
—Muslims stand guard over one another,
—The reason of seclusion,
—Turning over a new leaf!
—The worst of malice & hatred,
—Commination against malice & hatred towards the companions
—Ghastly end of a person who bore malice and hatred towards the Sahabah, radi Allahu ta’ala anhum,
—The one feeling hatred towards the descendants of the Beloved Prophet, ﷺ, will be whipped by the pond of Kawšar,
—The enemy of the Aĥl-e-Bayt is a Hell dweller
—The one bearing malice or hatred towards the Arabs will be deprived of intercession,
—He who bore malice towards Arabs he bore malice towards me,
—When the hatred against the Arabs is Kufr?
—Love the Arabs for three reasons,
—Do we need to love the unbelievers of Arabia as well?
—The Arabs are fellow countrymen of our Holy Prophet, ﷺ,
—Feeling hatred towards a scholar and knowledge will result in devastation,
—He is spiritually ill with filthy inner self who bears malice against a religious scholar for nothing,
—Malice and hatred of a Jew physician against Imām Māzrī,
—An act of penance for hatred against the Awliyā al-Kirām,
—Individual efforts of a maternal uncle,
—Bear no malice and hatred towards anyone in your heart,
—Who is eminent?
—The dweller of Jannaĥ,
—It is essential to keep your heart clean along with your body,
—I want to come to you with a clean heart,
—Ponder over your heart,

—[1]. Make Du’ā to prevent malice against faithful & pious people,
—[2]. Remove the causes :
——-The First cause – anger,
———-A maiden of Jannaĥ for one who controls his anger,
——-Second cause – suspicion,
——-Third cause – gambling & drinking alcohol,
——-Fourth cause – abundance of bounties,
———-You will bear malice & grudge,
———-Bearing malice & hatred towards one another roots quickly,
—[3]. Make a habit of saying Salām and shaking hands
—[4]. Stop irrational thinking,
—[5]. Love Muslims for the pleasure of Allah, subhanahu wa ta’ala,
—[6]. Bearing malice & hatred due to worldly possessions makes no sense,

—Save your children from malice and hatred,
—A younger sister was murdered,
—What are we supposed to do if a person bears malice against us?
—Amnesty was announced on the conquest of Makkaĥ,
—Love replaced malice and hatred,
—How a Jew who was full of hatred and malice embraced Islam?
—I had hatred towards you,
—A malice bearer can also benefit you.

The Ways to Save Others from Your Malice :

—[1]. Avoid interrupting someone’s conversation,
—[2]. Avoid smiling during condolences,
—[3]. Be careful in pointing out someone’s mistake,
—[4]. Act in accordance with the occasion,
—[5]. Seeking advice removes malice & hatred,
—[6]. The way to reform someone should be full of affection,
—[7]. Do not send marriage proposal upon proposal,
—[8]. Do not discourafe for nothing,
—[9]. Do not scold others,
——–A servant showing his terms & conditions from far,
—[10]. Have spiritual treatment too!

—No one will bear malice and hatred against any one,
—There would be no malice or hatred among the dwellers of Jannaĥ,
—How can malice and envy exist!
—Further types of malice,
—Superior deed,
—We might have a misunderstanding!
—Did you ever show affection for those whom I love and bear malice towards my enemies?
—Corrupt beliefs-holding person was not fed,
—When a non-Muslim touched A’lā Hadrat, may Allah be pleased with him,
—The company of those who hold corrupt belief, is a deadly poison for faith,
—Religious or worldly education must not be acquired from a heretic.

The Précis of the Book :

—The bearer of malice will face the following consequences,
—Remedy for malice,
—Ways to save others from malice towards you! 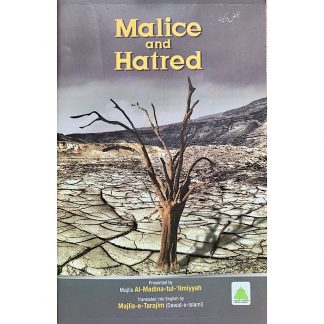