Description :  An Alarming Discourse Describing the Rulings and Harms of Alcohol!

Mother of Evils (Alcohol) is considered haram (forbidden) due to it’s destructive nature, not to mention it leads to all sorts of further sins. This important book gives a detailed discourse why alcohol is forbidden from the Islamic legal (shari’i) viewpoint using many authentic sources (ahadith) as well as parables and anecdotes.

—Excellence of Salat-‘Alan-Nabi,
—Mother of all Evils,
—Was it alcohol or vinegar in the bottle?
—Fear of the beings,
—Gatherings of drinking,
—Open war against the commandments of Allah, subhamnahu wa ta’ala,
—One sin carries ten misdeeds,
—What is alcohol?
—The reason of the name ‘Khamr’
—Ruling on alcohol,

—Ruling on the earnings from alcohol,
—Alcohol is haram whether it is less or more,
—Eight rulings regarding Khamr (alcohol),
—Ten proofs for the impermissibility of alcohol from ‘Allamah Shami,    —When did alcohol become impermissible?
—Four verses from the Qur’an regarding alcohol,
—Wisdom in stepwise prohibition,
—The Liking of Milk by the Noble Prophet, may Allah bless him and grant him peace,
—Alarming Madani pearls by A’laHadrat’s father, Mawlana Naqi ‘Ali Khan,

—The difference between ‘Sharab’ and ‘Sarab’
—Implementation of prohibition,
—Conduct of the Companions of the Prophet, may Allah bless him & grant him peace,
—Difference between a Muslim and a non-Muslim,
—Harmful effects of drinking,
—Economic harms of alcohol,
—Medical harms of alcohol,
—Social harms of drinking,
—The alcoholic cannot recognise his family relations,
—Alcoholic and his household,

—Remain distant from alcoholics,
—Madani pearls from a prince of the Prophet, may Allah bless him & grant him peace,
—Alcohol and Satan,
—Satan of alcoholics,
—Alcohol and the intellect,
—Alcoholic performing Wudu with urine,
—The alcoholic’s never ending desire,
—The biggest sin of all,
—Blind alcoholic,
—Alcohol and death,

—Attempts to prohibit alcohol,
—The alcoholic and his faith,
—Five sayings of the Prophet, may Allah bless him & grant him peace, regarding an alcoholic,
—Fate of heedless alcoholics,
—Drinking alcohol as medicine,
—Deprivation from Iman due to alcohol,
—A foolish argument,
—Ten harms of alcoholism,
—Curse upon the alcoholic,
—Hatred for even a drop of alcohol,

—The neck of Hell,
—Five Punishments on the Day of Resurrection for the alcoholic,
——[1]. The appearance of the alcoholic on the Day of Judgment,
——[2]. Smelling fouler than a rotten corpse,
——[3]. Welcome with the iron hammers,
——[4]. Horrific view of an alcoholic’s torment,
——[5]. The alcoholic will rise from the grave…,
—Alcoholic and the heavenly wine,
—Alcoholic and the fragrance of Paradise,
—Repent as the Mercy of Allah, subhanahu wa ta’ala, is immense, 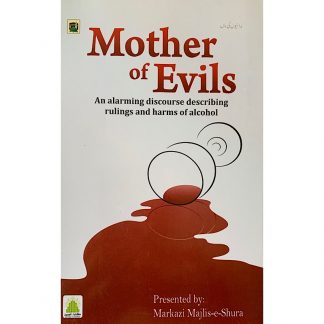 You're viewing: Mother of Evils – Islamic Book £3.99
Add to basket