The Status of a Woman in Islam

The Status of a Woman in Islam, In Light of the Qur’an and Sunnah is a product of the thoughtful and considered research of Shaykh Muhammad Imdad Hussain Pirzada of Jamia Al-Karam

Details:  The Status of a Woman in Islam : In Light of the Qur’an and Sunnah,
*[A5] Paperback – 88 pages,
by Shaykh Muhammad Imdad Hussain Pirzada,
Published by Al-Karam Publications, UK.

The Status of a Woman in Islam, In Light of the Qur’an and Sunnah is a product of the thoughtful and considered research of Shaykh Muhammad Imdad Hussain Pirzada of Jamia Al-Karam, who is a renowned religious scholar of Great Britain as well as a research scholar with deep understanding of contemporary issues.

Comprehensively, yet with much brevity and clarity, the author has expressed and expounded upon the great status of respect and dignity with which Islam has honoured women; all in light of the Qur’an and Sunnah,—-Dr Sahibzada Sajid Ur-Rehman,  Islamic Research Institute.

Shaykh Pirzada has made positive and effective use of great effort and research and, after an extensive and deep study of Qur’anic exegeses, volumes of prophetic traditions and books of Islamic jurisprudence, he has provided authentic and sound references from the Islamic teachings. Moreover, to further support his findings, he has brought forward evidences from contemporary disciplines as well as scientific and psychological data and information. The opinions and statements of non- Muslims have also been mentioned.

In this manner, as a result of the delightful mixture of rational and traditional proofs and with historical references, he has presented his thoughts and findings and, in doing so, has established the truthfulness of Islam, its greatness and pre-eminence.—Professor Dr Bashir Ahmad Siddiqi, University of the Punjab, Lahore, Pakistan.

Chapter [1] The Supreme Creation,
—Promise of Paradise,
—Three Roles of a Woman.

Chapter [2] A Woman as a Mother,
—More Prophetic Traditions relating to the Eminence of the Mother.

Chapter [4] A Woman as Wife,
—Some Prophetic Traditions relating to the Rights of a Wife,
—The Husband -Wife Relationship,
—Widow and Divorcee.

Chapter [5] Pleasant and Amiable Treatment,
—Loving the Woman,
—Fear of Allah, The Most High,
—Solace of a Woman,
—Best Provision,
—Special Concessions,
—Special Lecture for Women.

Chapter [6] Scholarly Status and Freedom of Expression,
—Education of Women.

Chapter [8] The Role of a Woman in Islam,
—The Propagation of Islam,
—Political Rights.

Chapter [9] Some General Objections,
—The Woman’s right to Inheritance,
—Why does a man receive twice the Inheritance Share of a Woman?
—Why has Man been appointed over a Woman?
—Polygyny (having multiple wives),
—Polyandry (having multiple husbands),
—The Issue of marrying a Woman from amongst ‘The People of the Book”!
—The Issue of Bondmaid,
—The Issue of the ‘houri‘ of Paradise,
—The Logic Behind the Veil,
—The Right to Freedom of Opinion in Marriage,
—Meeting before Marriage,
—The Testimony of a Woman.

Includes extensive footnotes, with references from the Noble Qur’an and Hadith.

Other books by this author 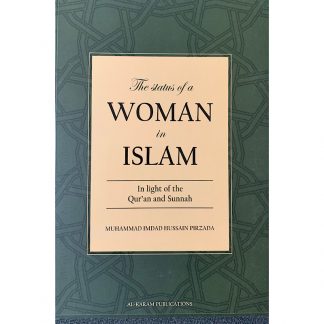 You're viewing: The Status of a Woman in Islam £9.25
Add to basket